The battle was the result of civil war between Gaius Octavian and Mark Antony, who claimed, after the assassination of Caesar, the power to the endless state of Rome. It ended with the defeat of Antony and Cleopatra and their escape.

The ancient Nicopolis spreads over an area of ​​9000 acres on the peninsula of Preveza, in SW Epirus. Established by Octavian after the battle of Actium in 31 B.C., when the inhabitants of the neighboring cities of Epirus, Lefkada, and Acarnania were then forced to settle in the area. The city enjoyed special political and economic privileges. It had its own mint and organized every four years the Aktion, which included athletic competitions, music and race. Nicopolis was spiritual men attraction of the era, such as Epictetus (89 A.D.). The population of the city continued during the Byzantine period.

As a transportation and commercial hub between East and West Port in the Ionian and Amvrakikos Gulf, became the capital of the Roman province of the Old Continent and Episcopal seat, knowing heyday. The economic and political crisis of the third century A.D., earthquakes and invasions of the Goths seriously affect the life of the city. In 395 A.D. sacked by Alaric and 475 A.D. conquered by the Vandals. With the invasion of the Goths of Totila (551 A.D.) begins to decline and in the late 9th or early 10th century no longer exists. 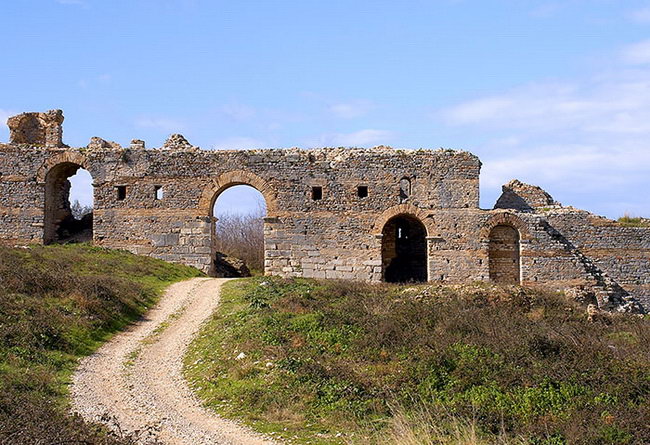 The most important monuments of Ancient Nicopolis include:

The Nymphaeum. It consists of two buildings with simple, not decorated facade and niches inside. In this ended the pipeline carrying water from the belt into Nicopolis. It is doubtful whether the buildings are modern. Of these, the north must be built in the early 3rd century A.D.

The Conservatory. It consists of a hollow, the orchestra and the stage. Three semicircular arcades support the hollow, ensuring slope. Ii was built in the 1st century A.D. and was used until the second half of the 3rd century A.D.

The Northern Baths («Bentenia»). Roman public building, consisting of curved and rectangular spaces connected together with a plurality of openings and bear semicircular niches.

The monument of Augustus. Established by Octavian-August, 31 B.C., after the battle of Actium and was dedicated to Mars, Poseidon and Apollo Actium. It consists of a stone barrier, top hat, which had annexed the bronze rams of Anthony’s ships. The remaining spoils of the battle were housed together with the sculptures in a gallery on the plateau above the podium.

The Theatre. The scene is high, possibly two floors, with three arched entrances. The performances were given in the «logion» between the stage and the orchestra. Three underground corridors facilitated ancillary to these elements of the spectators in the hollow, below which there were as many galleries.